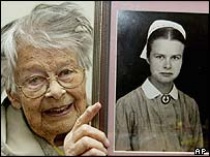 A survivor of Adolf Hitler's wartime bunker in Berlin has been tracked down, a German newspaper claims.

The Berlin paper BZ relates 93-year-old Erna Flegel's account of the last days of World War II, under the headline "I was Hitler's nurse".

Mrs Flegel said she stayed in the bunker after Hitler killed himself and was there when Soviet troops arrived.

She said Hitler was so paranoid that he even suspected spies had filled his cyanide capsule with false poison.

From January 1943 until the end of the war, Mrs Flegel's job was to give medical treatment to Hitler and his inner circle, she told the paper.

She was interviewed by US secret service agents in 1945. Flegel then lived a life of anonymity until 1977 when documents including her interrogation were declassified. The media later tracked her down to her residence, a nursing home in Germany, but she has kept silent about her experiences for the past 60 years, BZ reports.

Now, however, she said she had decided to speak out, telling the paper: "I don't want to take my secret with me to the grave."

Mrs Flegel's story does not challenge what is already known, but does add new details.

She said of Hitler: "By the end, he didn't trust anyone any more - not even the cyanide capsule he swallowed."

She also recalled trying to save the lives of the six children of Josef Göbbels, Hitler's propaganda chief, but said his wife Magda, who poisoned them, was "merciless".

Mrs Flegel said that after Hitler's suicide, Göbbels took over as leader, but no-one paid any attention to him.

"His last subordinates shot themselves in succession," she said. "And those who didn't shoot themselves tried to flee."

She said she remained, however. "I had to look after the wounded."

In the newspaper interview, Mrs Flegel described the atmosphere in the bunker as the noise of approaching Soviet forces grew.

"You could feel that the Third Reich was coming to an end," she said. "The radios stopped working and it was impossible to get information."

She was taken prisoner by the Soviet Red Army on 2 May. Dr. Haase, Helmut Kunz and a fellow nurse, Liselotte Chervinska were captured with her at that time. Upon capture, Soviet troops advised her to remain in the bunker complex where it was safer.

She said she stayed for several days, and was one of the last people to leave the bunker.

Adolf Hitler's nurse, Erna Flegel, now 93, ailing and in a nursing home in Germany, broke her six-decade silence about her Führer and their lasT days together in Hitler's Berlin bunker.

In an exclusive interview, London's Guardian spoke at length with the former Red Cross nurse after the CIA declassified in 2001 her interrogation by U.S. officials in 1945.

Shortly after the 1945 interrogation, Erna Flegel went missing and was never interviewed by historians or others.

Hitler's secretary, Traudl Junge, authored her own memoirs of her experiences. Her book was the basis of the German film Downfall - which detailed Hitler's last days.

The Guardian says the only other survivor, 88-year-old Rochus Misch, Hitler's telephonist, has not spoken to the media.

Flegel, however, saw the movie Downfall and decided to talk candidly about the closing months of the war as she joined Hitler and his top Nazi officials in an underground bunker near Berlin's Reichschancellery building.

- About Hitler: "His authority was extraordinary. He was always polite and charming. There was really nothing to object to."

- With the Russians nearing the capital: "The circle got increasingly small. People were pushed together. Everyone became more unassuming." She noted that the staff in the bunker began living "outside reality."

- On her efforts to save the children of Josef and Magda Göbbels, who killed their children with poisoning before taking their own lives: "She was a brilliant woman, on a far higher level than most people. I wanted her to take at least one or two of them out of the city. But Mrs. Göbbels simply said, 'I belong to my husband. And the children belong to me.'"

- Hitler and the children: He "was fond of them and drank hot chocolate with them and allowed them to use his bathtub."

- Hitler had begun to crumble before her eyes: "When parts of Berlin were already occupied, and the Russians were coming closer and closer to the center of the city, one could feel, almost physically, that the Third Reich was approaching its end. ... Hitler required no care; I was exclusively there for the care of the wounded. To be sure, he had aged greatly in the last days; he now had a lot of grey hair, and gave the impression of a man at least 15 to 20 years older. He shook a good deal, walking was difficult for him, his right side was still very much weakened as a result of the attempt on his life."

The paper noted that Hitler's decision to marry Braun made it "immediately clear to me that this signified the end of the Third Reich," she added, claiming that the death of Hitler's wolfhound Blondi "affected us more" than Braun's suicide.

"Oh dear God. She didn't have any importance. Nobody expected much of her. She was just a young girl, really," she said of Braun, who was only six months her junior. "She wasn't really his wife."

After Hitler's death, and with the Russians pressing into the very center of Berlin, Flegel was one of a handful of Germans to remain in the bunker.

"By this stage there were only six or seven of us left in the bunker," Ms. Flegel said. "We knew the Russians were approaching. A [nursing] sister phoned up and said, 'The Russians are coming.'

"Then they turned up in the Reichschancellery. It was a huge building complex. The Germans were transported away."

Flegel told the paper that the Russians treated her "very humanely" and denied that she was raped. Russian soldiers engaged in a mass rape of German women between the ages of 8 and 80.

Later, Flegel was interviewed by U.S. intelligence. She told them she believed firmly that Hitler was indeed dead.

According to the Guardian, Flegel "continued her career as a nurse, and also worked as a youth social worker and travelled to remote regions including Ladakh and Tibet. She never married. At the age of 90 she visited Crimea where she had worked as a nurse during the war before her transfer to Berlin.

"At 93, she is still mobile and lucid. She has few visitors. The only memento in her tiny room of her time at Hitler's side is a Reichschancellery tablecloth."