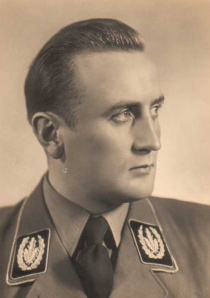 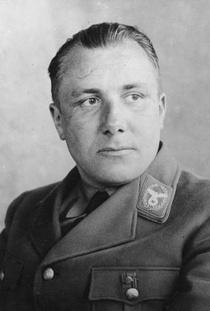 Axmann was born in Hagen on 18 February 1913. He studied law and in 1928, founded the first Hitler Youth group in Westphalia.

In 1932, he was called to be a Reich Leader (Reichsleiter) of the Nazi Party (Nationalsozialistische Deutsche Arbeiterpartei or NSDAP) to carry out a reorganization of Nazi youth cells and in 1933, became Chief of the Social Office of the Reich Youth Leadership. Axmann gained a place for the Hitler Youth in the direction of state vocational training and succeeded in raising the status of Hitler Youth agricultural work. He was on active service on the western front until May 1940. In August of the same year he succeeded Baldur von Schirach as Reich Youth Leader (Reichsjugendführer) of the Nazi Party. In 1941, he was severely wounded on the eastern front, losing an arm.

During the last weeks of the war, Axmann commanded units of the Hitler Youth (Hitlerjugend), which had been incorporated into the Home Guard (Volkssturm). His units consisted mostly of children and adolescents. They primarily fought in the Battle of Seelow Heights (Seelower Höhen), which was a part of the larger Battle of Berlin (Endkampf um Berlin). Many of the young people fighting for Germany under Axmann died having received neither military training nor equipment.

On 4 January 1944, Axmann was awarded the German Order, the highest decoration that the Nazi Party could bestow on an individual, for his services to the Reich. He and one other recipient, K. Hierl, were the only holders of the award to survive the war and its consequences. All other recipients were either awarded it posthumously, or were killed during the war or its aftermath.

During 1945, Axmann was continually pressured into letting young women be conscripted into combat roles for the last defense of Germany. Although Axmann had permitted young boys to fight in the final days, he refused to allow girls to fight. He stated, "Women bring life into the world, they do not take it."

During Hitler's last days, Axmann was among those present in the Führerbunker. On 30 April 1945, just a few hours before committing suicide, Hitler signed the order to allow a breakout. On 1 May, Axmann left the Führerbunker with SS doctor Ludwig Stumpfegger and Martin Bormann as part of a group attempting to break out of the Soviet encirclement. Their group managed to cross the River Spree at the Weidendammer Bridge.

Leaving the rest of their group, Bormann, Stumpfegger, and Axmann walked along railroad tracks to Lehrter station. Bormann and Stumpfegger followed the railway tracks towards Stettiner Station. Axmann decided to go alone in the opposite direction of his two companions. When he encountered a Red Army patrol, Axmann doubled back and later insisted he had seen the bodies of Bormann and Stumpfegger near the railroad switching yard (Stettiner Bahnhof) with moonlight clearly illuminating their faces. He did not check the bodies, so he did not know how they died. Axmann could see no signs of an explosion, and assumed that they had been shot in the back.

After his release, Axmann worked as a sales representative in Gelsenkirchen and Berlin. On 19 August 1958 a West Berlin de-Nazification court fined the former Hitler Youth leader 35,000 marks (approximately 3,000 pounds, or $8,334.00 USD), about half the value of his property in Berlin. The court found him guilty of indoctrinating German youth with National Socialism right until the end of the Third Reich, but concluded that he had been a Nazi from inner conviction rather than base motives. During his trial, Axmann told the court that he had heard the shot by which Hitler committed suicide. He also stated that he had attempted to escape from central Berlin along with Martin Bormann, who he said had died during the attempt. Axmann became a prosperous businessman after the war.

Artur Axmann, who had sent thousands of young Germans to fight the Red Army and who later claimed to have been the last person to see Hitler alive, died in Berlin on October 24, 1996. He was 83.